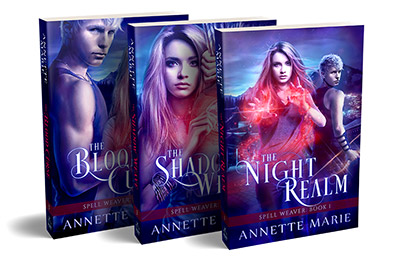 Clio—an exiled royal with one chance to end her banishment. Lyre—a spell weaver trapped by the power of his lethal, cutthroat family. She’s come to steal his family’s forbidden magic while he must protect it at all costs, and in a world where beauty hides the worst cruelty, neither realizes that the other desperately needs to be saved.

"The chemistry is sizzling, the banter is amazing, the feelings are real and deliciously slow-burn. Really, all the elements that make up an amazing book are here and they are woven together expertly."

"The Night Realm was an intoxicating and spellbinding ride! . . . With a cast of characters that was enchanting, and pages that were filled to the brim with action and intrigue, it was impossible not to fall in love with this book."