Are you ready for this? It’s time to return to the Steel & Stone world! I’m delighted to reveal the cover for the sixth installment in the series, STEEL & STONE: COMPANION COLLECTION! 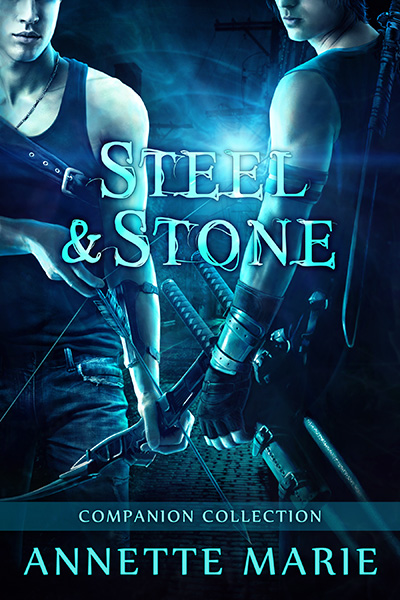 From her first fateful glimpse of the Sahar Stone in Chase the Dark to the explosive battle in Asphodel in Unleash the Storm, Piper fought with Ash and Lyre beside her. A draconian and an incubus—an unlikely friendship of two skilled warriors, deadly in very different ways, both hiding dark secrets and dangerous pasts. Now, return to the Steel & Stone world—this time through their eyes. In this collection of short stories set on the same timeline as the original series, Ash and Lyre reveal a whole new side to the trials they faced—both familiar scenes and never-before-seen adventures. Discover Ash’s first impression of Piper, their fight in the Styx ring, Lyre’s secret role in the escape from Asphodel, and more. The collection includes 3 stories from Chase the Dark, 2 stories each from Bind the Soul, Yield the Night, and Reap the Shadows, and 3 stories from Unleash the Storm. And exclusively in this edition, read the first chapter of The Night Realm (Spell Weaver: Book 1), a new series set in the Steel & Stone universe.

This novel-length collection is coming out on August 22, 2017. (Yes, less than a week away!!) I had so much fun writing the book, and getting inside Ash’s and Lyre’s heads was definitely a cool experience. I hope you’re excited to dive back in with the gang again! PS –  Don’t forget about the upcoming cover reveal for The Night Realm (Spell Weaver: Book 1) on August 21. It releases on October 20 and you definitely won’t want to miss it! PPS – In case you missed my post about it, we’ll be returning to the Steel & Stone universe one more time in a future sequel series too.