Only two weeks until the final installment in the Red Winter Trilogy releases! I’m so excited to share the conclusion of Emi and Shiro’s journey. ARCs are going out today as well (watch your inbox, ARC readers!) and in the meantime, here’s an excerpt from Immortal Fire! 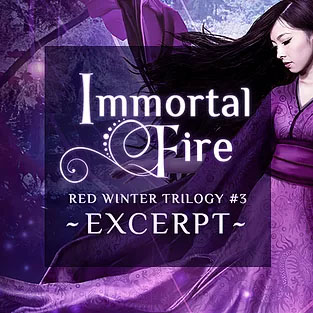 Violent shivers pulled Emi from the depths of sleep. The chill in the room cut right through the layers of blanket and kimono, and her toes ached from the cold. Curled in a tight ball beneath her blankets, she exhaled harshly, half expecting her breath to fog the air. Beyond the thin partition that separated her sleeping quarters from the rest of the room, the windows rattled in a fierce wind. A winter storm? A feverish ache throbbed in her muscles, though she didn’t think she had slept for more than a few hours. Yawning, she forced her tired body off the futon. Cold hit her like a splash of frigid water but even that wasn’t enough to dispel her drowsy daze. A short, fumbling search uncovered no extra blankets in the closet within her small alcove. Wrapping an arm around herself for warmth, she slid a panel open and peeked into the main room. The remains of Shiro and Yumei’s late dinner had been cleared from the table, and the unlit brazier was devoid of light or warmth. Across the room, a second futon had been laid out near Shiro’s, and dark shapes filled both. Trust the yokai to sleep right through the freezing cold. Behind their futons was a larger closet where bedding was stored. Surely there would be an extra blanket in there. She stumbled toward it in exhaustion. Her chest felt hollow and empty, and some of the chill that plagued her emanated from within. As she crossed the room, an icy breeze rushed across her. Jerking back a step, she turned toward the sliding garden doors. A six-inch gap revealed the night-swathed garden beyond, where snow flew almost horizontally in the wind. Why on earth had they left the door open? With a tired scowl, she yanked it shut. The room immediately felt warmer. Shaking her head, she stopped at the foot of Shiro’s futon, the light from the window glimmering on his white hair. Not that long ago, she had woken him from a nightmare, and he had thrown her into a wall before rousing enough to realize he was about to rip her throat out. Attempting to sneak between their futons to reach the closet was probably unwise. “Shiro?” she whispered. “Are you awake?” He didn’t stir. Neither did Yumei, who slept on his back with his head turned away, his hair splayed untidily across his face in a way that was very unlike the usually reserved yokai. He rarely slept when anyone else was nearby, at least as far as she’d seen. Maybe her ki had tired him. “Shiro?” she tried again more loudly. When he again didn’t move, not even a twitch of his ears, a nervous prickle climbed her spine. Shiro wasn’t that deep of a sleeper. And why hadn’t her clumsy banging of the garden door woken them? A spike of adrenaline cut through her drowsiness as she realized how unlikely it was that Shiro and Yumei would go to sleep with a door ajar. Had the wind blown it open? Or . . . something else? She scoured the room, but it was clearly empty. Biting the inside of her cheek, she stepped between the futons and crouched. “Shiro,” she called. “Wake up!” No reaction. Hoping he wouldn’t attack her, she touched his shoulder. He slept on, eyes closed, face slack. Her apprehension intensified into real fear. “Shiro!” She gripped his shoulder and shook it, but he still didn’t wake or so much as stir. Was she dreaming? Was this a nightmare? She spun around and reached for Yumei. “Yumei, wake up! Please wake up!” She shook him but he was as unresponsive as Shiro. In desperation, she hit his shoulder with her open palm, yelling his name. “What’s wrong with you? Wake up!” As she turned, intending to grab a handful of snow from outside to shove in Shiro’s face, the air above him shimmered strangely. She went rigid, squinting into the darkness. A shadow took form. A small body, thin limbs, ragged black hair. The ghostly child crouched on Shiro’s chest, her blank, bottomless stare fixed on Emi. Her heart thudded in her ears. A kanashibari, the dream-weaving yokai that had been watching Emi in the bath. That was what she’d forgotten to warn Shiro about! And now it was sitting on him, and he wouldn’t wake up. She lurched back to Yumei. A second kanashibari appeared before her, perched on his torso. The new one, another little girl with short, stringy hair and a pale kimono, looked up at Emi with empty black eyes. The child’s lips pulled up in a rictal grin, and her tiny arm shot out. Emi shoved the yokai away, but her hands passed right through the spectral body, feeling nothing but frosty air. The yokai reached for her face and a small, frigid, solid palm pressed against her forehead. A wave of burning ice surged into Emi’s skull, blanketing her thoughts. Impossible, unyielding drowsiness crashed through her. Before she could react, before she could even think about resisting, she collapsed on top of Yumei’s unconscious body and slid into darkness.

I hope you enjoyed the teaser! Immortal Fire comes out on April 11.